Flutter vs Kotlin – Which Is Better for Your Next Project?

Here, we will discuss the distinctive features of Flutter vs Kotlin, how they differ from each other, when and in which scenarios developers can use both frameworks to gain maximum advantage.

As per Statista reports, one-third of mobile app developers make use of cross-platform technologies or frameworks to build mobile apps.

Gone are those days when cross-platform mobile app development used to have a single approach – React Native. Business is constantly looking for new ways to gain more users into the mobile app domain.

Did you know: As per eMarketer, an average American spends almost 4 hours on mobile devices.

A quick rewind to the year 2016; Kotlin – An open-source statically typed cross-platform programming language with type interference was dominating the cross-platform app development market. Within a few months, at the beginning of 2017, the release of Google’s Flutter hit the market hard, making everyone wonder who will rule the cross-platform mobile market.

The reason behind the rising popularity of these cross-platform frameworks is quite understandable – Single codebase for multiple platforms, quick-to-market time, and lower development cost.

For businesses trying to enter into the world of mobile app development, one of the most puzzling questions being faced is – which framework can help them to build scalable, cost-effective yet secure mobile solutions?

So, before we compare two Kotlin vs Flutter frameworks to see which one is better, it's quite important to understand what these two frameworks bring to the table.

It is free, open-source and one of the fastest-growing technology in popularity to deliver excellent native experiences to top brands including:

Developed by JetBrains, Kotlin is a general-purpose programming language designed to interoperate fully with Java. Supported by Google, it is one of the most preferred languages for Android app development. It let developers’ share codes, data, and business logic across platforms including Linux, macOS, Android, iOS, and JVM.

Though the concept to invest in Kotlin for cross-platform app development is new-fangled, but it is highly embraced by multiple brands including:

Flutter vs Kotlin – How Popular are these Frameworks in the Market?

If you just look at Google Trends, you’ll notice that Kotlin has skyrocketed in terms of popularity as compared to Flutter.

Here’s a Stack Overflow trend graph of Flutter vs Kotlin

One of the first few things often developers are much interested in is the learning curve that comes while choosing the framework. Overall, Kotlin is easier to learn since Google has made innumerable courses available online. Another reason is – It is highly interoperable with Java. However, the current focus of Kotlin is more on developing its extension – Kotlin multiplatform. Compared to Kotlin, Flutter has comprehensive documentation and resources available which makes it easier for developers to learn and kickstart with app development.

Flutter vs Kotlin: A Detailed Comparison Based on Imperative Parameters 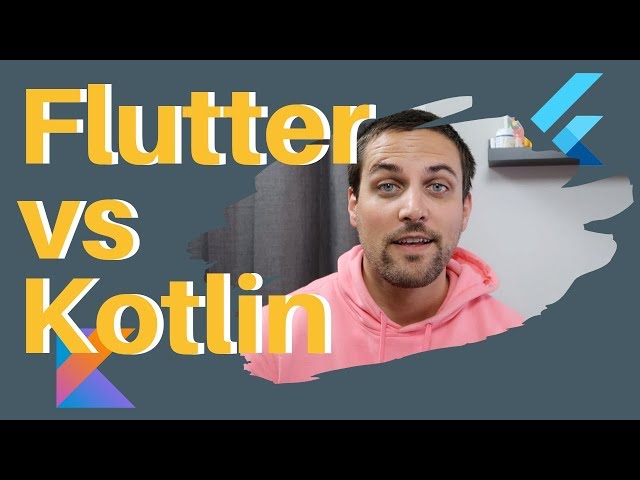 Though both Kotlin and Flutter offer great things to the mobile app developers, however, a choice must be made between the two based on a few imperative metrics as below:

When it comes to performance, Flutter goes over the edge. All thanks to the hot reloading functionality that it offers to its users.

What does that mean?

Well, Flutter’s hot reloading functionality leverages convenience to mobile app developers in making alterations at the backend and viewing the difference simultaneously at the front-end.

In other words, Flutter allows mobile experts to promptly decide whether the changes made in the business logic look apt in the front-end with other app elements or not.

Talking about Kotlin, it doesn’t disappoint with its performance either.

One of the biggest advantages of the Kotlin language is that it compiles the code in the same format as per the targeted platform. This in turn allows for better-customized performance as its native counterparts.

Flutter offers a unified user experience across all platforms. Flutter is a widget-oriented cross-platform framework that has innumerable customization options – Allowing Flutter app developers to build a functional and scalable application.

Kotlin, on the other hand, is a general-purpose programming language that gives liberty to UI developers to customize UI experience and build an app aligned with their vision in a hassle-free way.

Flutter seems a bit faster than Kotlin. However, Kotlin has much more to offer. Its concise syntax and code reusability results in faster app development and quick app-to-market-time.

Though the speed of coding depends on the complexity of the app, still both frameworks save development time to a great extent by using a single codebase to build apps for multiple platforms.

Both Flutter and Kotlin are open-source and hence they’re free to use. So, there’s no better player in this scenario.

When it comes to leveraging testing support, Flutter and Kotlin differ from each other.

While Flutter offers a huge variety of testing features including a unique widget testing feature, Kotlin’s major focus lies in delivering backend-as-a-service tools. It makes use of Firebase to offer secure backend options.

Which Framework to Choose for Building Killer Apps – Flutter or Kotlin?

There’s no proper answer to this question since it solely depends on what you’re trying to do and what you want to do. Both Flutter and Kotlin are flexible frameworks to work with to build a certain type of application. Let’s find out when and how developers should choose which frameworks to build feature-rich applications.

When Developers should use Flutter?

Why not choose Flutter?

Not everything seems to be picture-perfect in this world. And, there’re a few problems with Flutter too.

All in all, Flutter is not recommended to build comprehensive and complex projects.

Though Dart is quite easy to learn and understand, it doesn’t change the fact that the majority of developers barely know this language. Hence, there is a learning curve involved.

When Developers should use Kotlin?

Why not choose Kotlin?

Below are a few demerits that may hinder you to use Kotlin:

Though the platform is free to use, it delivers a semi-native performance which makes the overall app development quite expensive.

The platform is still in the experimental stage which means only a few libraries are available to develop apps. The heap of new libraries for better development is expected with the release of the DateTime library.

Implementing the Kotlin framework will not replace all API. In order to build an app on Kotlin, a developer should have sound knowledge of each platform and API to work better.

Flutter vs Kotlin – Who Wins the Race?

Both Google’s framework Kotlin and Flutter are reliable that aim to reduce development time and cost to mark its presence on Android and iOS platforms.

On one hand, Flutter is more popular than a new-fangled Kotlin. On the other hand, Kotlin is preferred to build Android applications. However, both the frameworks offer native-like performance using a single codebase. These two frameworks are giving intense competition to each other. And, with every new release, they’re getting tougher to bet on.

Here you have a read a detailed guide on the differences between flutter and kotlin, and if you’re in a dilemma to choose the best framework to build your mobile app, it is advisable to consult a leading mobile app development company and analyze your cross-platform app requirements and priorities to determine which is better – Flutter vs Kotlin.

Share this article
Subscribe to The Friday Brunch
Our twice a month newsletter featuring insights and tips on how to build better experiences for your customers
READ ALSO
When is Flutter good for your business app development?
Posted by Milind Mevada · 27 Jan, 2021 · 5 Min read
How to get your Alexa skill ready by Kotlin
Posted by Aakash Mehta · 02 Jan, 2019 · 4 min read
Flutter BLoC Tutorial For Absolute Beginners
Posted by Palak · 15 Nov, 2022 · 10 Min read